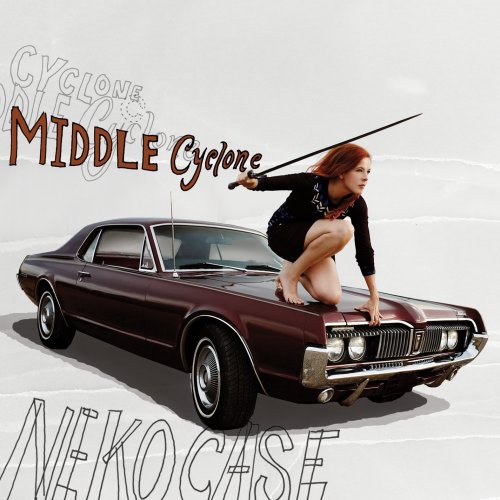 Middle Cyclone
Artist: Neko Case
Format: CD
New: IN STOCK AT OUR STORE $13.99 Used: Used Items are fully guaranteed to be free from defects, and good as new.
Wish

The tornado that blows through the title and several songs on Middle Cyclone is an apt metaphor. Neko Case has famously taken her own twisted route, lighting for a time in the South, in the West, in the Northwest, in Canada, flirting with as many musical styles as homes.

Indie/alt-country songwriter-goddess Neko Case is nothing if not a chameleon, capable of wrapping herself around soulful twang, snotty 'tude, or bouyant teen energy. But if there's a thread running through her work, it's her undeniable magnetism as a poet. And on CYCLONE, by fully embracing the theme of love for the first time in her career, she transforms herself into an almost mystically insightful weaver of romantic imagery. On "Polar Nettles" in particular, Case effortlessly unravels the tale of a woman so powerful that she acts as a centrifuge spinning out the sun's rays. Guests range from M. Ward to her co-members from the New Pornographers, but like Dolly Parton during her early-'70s heyday, there is no mistaking who the moment belongs to. Whether it's the title track's subdued, folky rumination on the fears of facing happiness or the dramatic, Stevie Nicks gypsy-pop of penultimate track "Red Tide," Case's musical presence is, in fact, a CYCLONE OF unforgettable emotion.