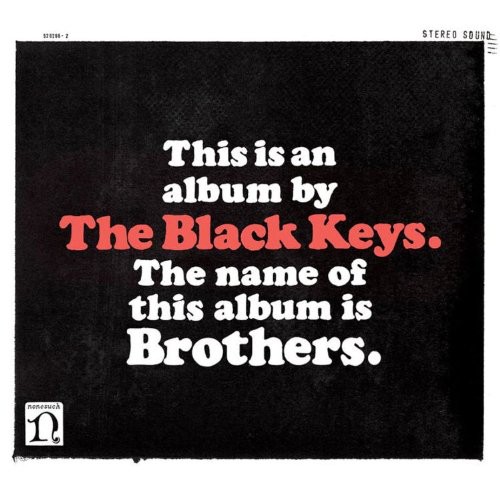 Brothers
Artist: The Black Keys
Format: CD
New: IN PRINT AND ORDER-ABLE - NOT IN STORE, call or email $13.99 Used: Used Items are fully guaranteed to be free from defects, and good as new.
Wish

The maturation of the Black Keys as record makers and performers has been both subtle and startling. With their 2008 Nonesuch release 'Attack & Release' - the fifth album of their eight-year career which doubled the sales of their previous album and Nonesuch debut 'Magic Potion' - guitarist Dan Auerbach and drummer Patrick Carney illustrated the durability of their few-frills sound, a mysterious and heavy brew of seventies-vintage rock, classic R&B and timeless, downhearted blues. Producer and pal Danger Mouse, their first outside collaborator, didn't try to reinvent their sound but further isolated its essence with the help of a few carefully chosen guest players and some retro-modern electronic gear. It didn't need to get slicker to get better, or, as the Boston Globe put it, ''Attack & Release' proves that cleaning up the boys still won't stop them from tracking mud all over the house.'

''Brothers'' is the sixth album by American blues-rock duo, The Black Keys. It is their third release on Nonesuch Records. It was released on May 18, 2010. Its title, track listing, and cover art were announced on March 2, 2010 by Pitchfork Media. The first single off the album is "Tighten Up". The album debuted at #3 on the Billboard 200 with approximately 73,000 copies sold in the first week released, making the band's highest charting album to date. - Wikipedia