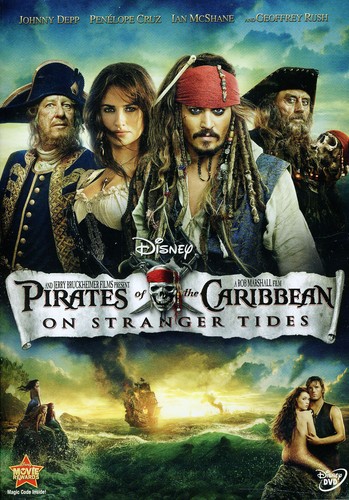 Pirates of the Caribbean: On Stranger Tides
Artist: Pirates Of The Caribbean [Movie]
Format: DVD
New: IN PRINT AND ORDER-ABLE - NOT IN STORE, call or email $12.00
Wish

From Disney and Producer Jerry Bruckheimer come all the fun, epic adventure and humor that ignited the original. Johnny Depp returns as Captain Jack Sparrow in PIRATES OF THE CARIBBEAN: ON STRANGER TIDES. A tale of truth, betrayal, youth, demise -- and mermaids! When Jack crosses paths with a woman from his past (Penelope Cruz), he's not sure if it's love, or if she's a ruthless con artist using him to find the fabled Fountain of Youth. Forced aboard the ship of the most feared pirate ever, Jack doesn't know whom to fear more -- Blackbeard (Ian McShane) or the woman from his past. Directed by Rob Marshall, it's filled with eye-popping action, mystery and all-out wit. Complete with bonus features, this is one thrilling journey you won't want to end.