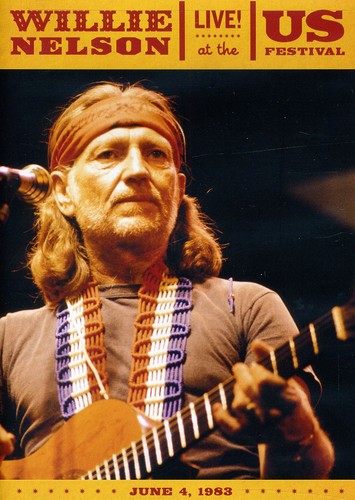 Live at the US Festival, 1983
Artist: Willie Nelson
Format: DVD
New: IN STOCK AT OUR STORE $16.99 Used: Look for a opened copy. You want a opened copy? Fully guaranteed
Wish

Willie Nelson appeared at the US Festival on June 4, 1983. It was billed as Country Day, with Waylon performing alongside such artists as Waylon Jennings, Alabama, Hank Williams, Jr.., and Emmylou Harris. The US Festival was held over two weekends in 1982 and 1983. Steve Wozniak, cofounder of Apple Computer, funded the concerts and accompanying technology exposition, as well as the construction of a brand-new outdoor venue in Glen Helen Regional Park in San Bernadino, CA. Nearly every musical genre was represented by bands as diverse as U2, Fleetwood Mac, David Bowie, Ozzy Osbourne, Willie Nelson, Van Halen, the Police and the Clash. Over the combined seven days of the festival, more than one million people passed through the entrance gates.