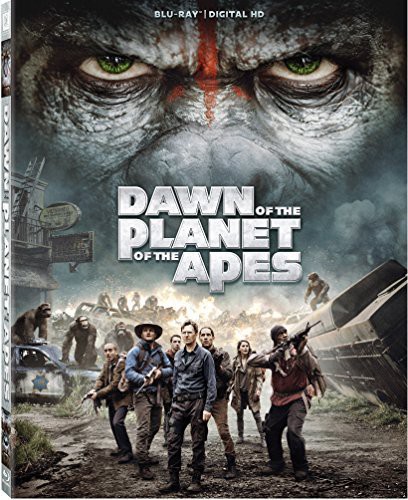 A war begins to brew between man and ape in this sequel to the 2011 hit Rise of the Planet of the Apes. It's been ten years since the Simian Flu wiped out most of humanity, and somewhere deep in the woods outside of San Francisco, Caesar (voice and performance capture by Andy Serkis) and his primate companions have established a thriving village built on the principles of peace and community.

Shortly after welcoming a baby brother into the family, Caesar's son Blue Eyes (Nick Thurston) is walking through the forest with his friend Ash (Doc Shaw) when they cross paths with a human named Carver (Kirk Acevedo), who impulsively draws his gun and shoots Ash at the first sign of aggression. As it turns out, Carver is part of a human expedition led by Malcolm (Jason Clarke), who, along with the rest of his crew, races to Carver's side just as Caesar and the rest of the apes answer Blue Eyes' desperate call for help. An enraged Caesar drives the humans away after realizing they are no longer a threat, and decides to dispatch a small crew to follow them rather than yield to the pleas of his aggressive advisor Koba (Toby Kebbell) to launch an all-out attack. Instead, he decides to show the apes' strength by amassing outside of the humans' makeshift community at the base of an unfinished tower, making it unmistakably clear that the two species should remain apart. Meanwhile, the point of the human excursion was to get a dormant dam running again in order to power their community, which will soon be thrust into darkness should they fail to take action. Convinced that he could strike a truce with Caesar that would allow the humans to repair the dam, which is located on the apes' land, Malcolm gets permission from human leader Dreyfus (Gary Oldman) to set out on his mission. Incredibly, thanks to the help of his girlfriend Ellie (Keri Russell), his son Alexander (Kodi Smit-McPhee), and a few other key allies, Malcolm succeeds. Still, his truce with the apes is a fragile one, and just when it seems that the primates and humans have learned to coexist in peace, a shocking act of betrayal threatens to spark a war that will determine the dominant species.