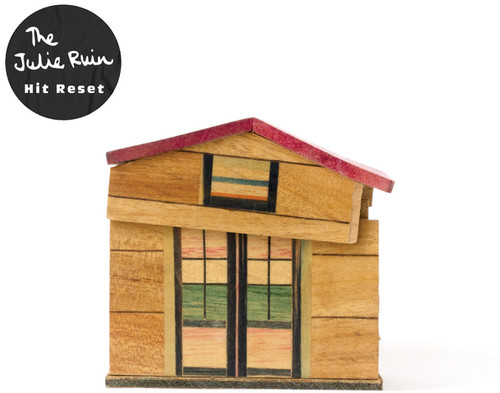 Hit Reset
Artist: The Julie Ruin
Format: CD
New: IN PRINT AND ORDER-ABLE - NOT IN STORE, call or email $15.99 Used: Look for a opened copy. You want a opened copy? Fully guaranteed
Wish

Kathleen Hanna stealthily assembled the members of The Julie Ruin without any of them realizing exactly what was happening. It all began in late 2009. Kathleen had not released an album since Le Tigre’s This Island (2004), and she was ready to jump back into music again. She knew her onetime Bikini Kill bandmate Kathi Wilcox was going to be moving to New York in the near future, so she didn’t even bother with finding a bass player at first. Carmine Covelli, who had toured with Le Tigre as their video guru, was having a blast at Kathleen’s birthday party when she abruptly asked him to be the drummer. A longtime admirer of Kathleen’s work, Carmine couldn’t say no to her at her own party, so of course he joined the band. Sara Landeau and Kathleen both taught at Girls Rock Camp and Kathleen lured her into the band by trading Pro Tools lessons for guitar lessons. Sara’s surf-informed style gelled perfectly with Kathleen’s sonic vision for her new band. Kathleen approached Kenny Mellman last with the idea that they should write country songs together to sell to other artists. Within a week of their first meeting, Kathleen’s mysterious “manager” (whom Kenny maintains does not exist) told her that they would never break into the Nashville songwriting scene, so Kenny might as well join her new band on keyboards. Done. In late 2014 they began work on their second album, Hit Reset, due out July 8th on Hardly Art records. Mixed by Eli Crews (with whom the band worked on Run Fast), Hit Reset expands on the band’s established sound: dancier in spots and moodier in others, with girl group backing vocals and even a touching ballad closer. Hit Reset is the sound of a band who have found their sweet spot. Kathleen’s vocals are empowered and her lyrics are as pointed and poignant as ever. From the chilling first lines of “Hit Reset”(“Deer hooves hanging on the wall, shell casings in the closet hall”) to the touching lines of “Calverton” (“Without you I might be numb, hiding in my apartment from everyone / Without you I'd take the fifth, or be on my death bed still full of wishes”), Hanna takes a leap into the personal not seen completely on the first album or possibly even in the rest of her work.