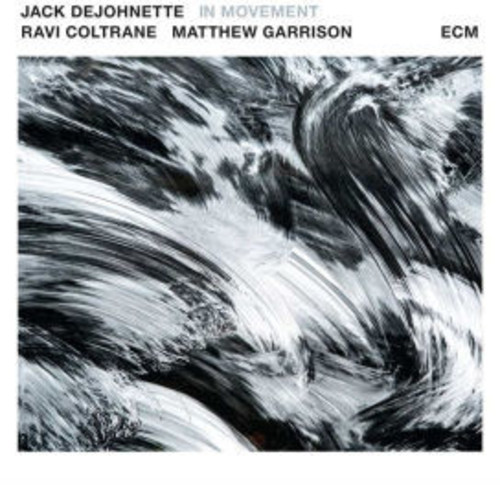 Jack DeJohnette (drums, piano, electronic percussion Ravi Coltrane (tenor, soprano and sopranino saxophones) Matthew Garrison (electric bass, electronics) There is a lot of history concentrated in Jack DeJohnettes adventurous new trio. Fifty years ago, as a guest with John Coltranes group, Jack DeJohnette played with the fathers of Ravi Coltrane and Matthew Garrison, and the program of In Movement opens with Coltranes harrowing and still pertinent elegy Alabama. Other covers include the classic Blue In Green by Miles Davis and Bill Evans (Jack is one of the few musicians to have played in the bands of both men) and Serpentine Fire, from the songbook of Earth, Wind and Fire, a tribute to Maurice White - who also collaborated with Jack in the early years. The Two Jimmys is an hommage to Jimi Hendrix and Jimmy Garrison, innovators both, and Rashied salutes the late Rashied Ali, another great drummer from Coltranes cosmos. For all the wealth of references, this is indeed a band in movement, taking the music forward. Ravi Coltrane and Matt Garrison, in their ECM debuts, both respond magnificently to DeJohnettes driving drumming, Ravi with superb solos, Garrison with lean bass lines and imaginative looping electronics. Jack DeJohnette: We are connected at a very high and extremely personal level that I believe comes through in the music. In Movement was recorded at New Yorks Avatar Studios in October 2015, and produced by Manfred Eicher.
back to top