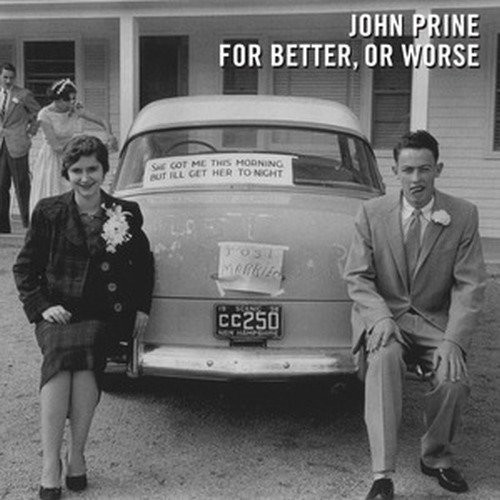 For Better, Or Worse
Artist: John Prine
Format: CD
New: IN STOCK AT OUR STORE $14.99
Wish

The follow up to John Prine's Grammy winning record, In Spite of Ourselves, For Better, or Worse features duets with Miranda Lambert, Kacey Musgraves, Alison Krauss, Susan Tedeschi,Lee Ann Womack & More. “I’ve always been a sucker for a duet, you know?” says John Prine in his Chicago-infused Kentucky accent. “I always liked it on TV when two people that didn’t ordinarily sing together would do somethin’ like ‘Baby, It’s Cold Outside’ and ham it up, kinda jokin’ around with it.” He especially likes duets when they are sung by a couple. “A lot of character comes out when a man and a woman are singin’ back and forth—unless it’s one of those modern recordings when they haven’t even met each other and they’re both singin’ to tracks in the studio,” he says.

For his new album, “For Better, or Worse,” his second collection of duets with female singers, they all came to him, in Nashville. “We did it live,” he says. “Starin’ in each other’s eyes.” It was the same for this record’s 1999 predecessor, “In Spite of Ourselves,” which has become one of Mr. Prine’s bestloved works, despite being mostly cover versions of old-school country songs. “The kind they don’t play on the radio anymore,”