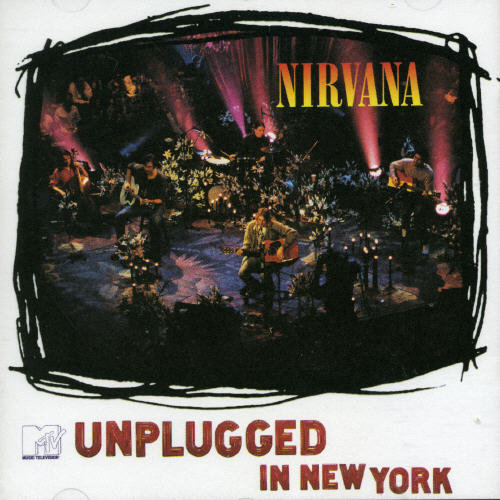 Sadly, MTV Unplugged stands as Nirvana's last album. While it's an album of covers and old songs, it ranks as one of the band's most cohesive records. Instead of relying on the trio's overpowering sonic force, Unplugged concentrates on Kurt Cobain's subtly shaded songwriting and Nirvana's deceptively simple musical power. Every version of their previously recorded songs, with the possible exception of "On a Plain," dramatically improves the original, and the covers reveal more about Cobain than he intended. By the time Nirvana close with a wrenching, spine-chilling version of Leadbelly's "Where Did You Sleep Last Night," the emotional complexity of Nirvana's music is clear. It's also clear that they could have made even greater music.

''MTV Unplugged in New York'' is a live album by the American grunge band Nirvana. It features an acoustic performance taped at Sony Music Studios in New York City on November 18, 1993 for the television series ''MTV Unplugged''. The show was directed by Beth McCarthy and first aired on the cable television network MTV on December 14, 1993. As opposed to traditional practice on the television series, Nirvana played a setlist composed of mainly lesser-known material and cover versions of songs by The Vaselines, David Bowie, Meat Puppets (during which they were joined by two members of the group onstage) and Lead Belly.

''MTV Unplugged in New York'' was the first Nirvana album released in the wake of the April 1994 suicide of singer/guitarist Kurt Cobain. The album debuted at number one on the ''Billboard'' 200, and has become the group's most successful posthumous release, selling five million copies in America by 1997. It was hailed by critics as proof the band was able to transcend the grunge sound they were commonly associated with. ''MTV Unplugged in New York'' includes two songs which were not aired on the original television broadcast of the concert: "Something in the Way" and "Oh, Me". The album won a Grammy Award for Best Alternative Music Album. In 2003, it was ranked #311 in ''Rolling Stone's'' 500 Greatest Albums of All Time list. The performance was released on DVD in 2007. - Wikipedia