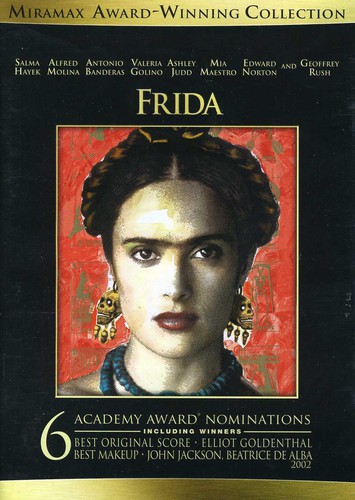 Frida
Artist: Hayek/Mollina/Banderas
Format: DVD
New: IN STOCK AT OUR STORE Used: Used Items are fully guaranteed to be free from defects, and good as new.
Wish

Ah, the biopic—thatstaple of the Lifetime channel for women and countless TNT original productions.How dreaded the scripts for these things are, and "Frida" is no exception (perhapsit's worth nothing that in the extra features, director Julie Taymor notes thatthe shooting script was the draft written by the uncredited Edward Norton, whoshows up in a silly cameo as Nelson Rockefeller, and who is currently making acameo as Salma Hayek's boyfriend). But what works here is Salma. Even with a scary,Bert-from-Sesame Street-style unibrow, she manages to give her portrayal of Mexicanpainter Frida Kahlo some real juice. Alfred Molina is also good as her on-again/off-againhusband, muralist Diego Rivera, but it's Salma and the rich palette shot by cinematographerRodrigo Prieto that survive the inanity of the screenplay.
This website uses cookies to personalize content and analyse traffic in order to offer you a better experience.
I accept Learn More
back to top