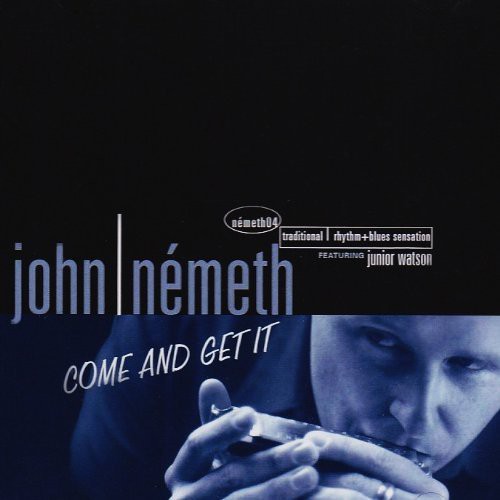 LINER NOTES FOR JOHN NEMETH "COME AND GET IT" By Bob Margolin Senior Editor Blues Revue Magazine and guitarist for the late great Muddy Waters "Out of the Blue" and "Old Soul" are the expressions that keep running through my mind as I listen to John Nemeth's Come and Get It. If you hear these songs on the radio for the first time, you'll presume you're listening to one of the '50s Rhythm and Blues legends. If you know a lot about music, it will drive you nuts that you can't identify the singer, because he must be one of the great ones. You hear vocalisms that remind you of Ray Charles or Junior Parker or Fats Domino, but it's not them. So you'll stop whatever you're doing and wait 'til the DJ tells you who's singing. John WHO!?! You'll do what it takes to find out who John Nemeth is, and you'll crack up when you find that he's a young white man from Idaho and that this recording was made in the 21st Century. His demographics are ironic because this "Old Soul" has arrived "Out of the Blue," not from a potato. John Nemeth is a natural-born Bluesman, and he proves it with every note he sings, shaping each one with emotion, taste and inspiration. As with the best singers, every phrase delivered is just right, neither over-sung nor under-powered. The subtle inflections and references to masterful singers bring fresh surprises with repeated listening. John Nemeth makes it sound easy. I remember hearing Muddy Waters for the first time on the radio and being knocked out by the human Heaven and Hell in his voice. I was amazed that the slide guitar on the song was just as powerful, so it made sense when I found out it was Muddy playing it. In the same way, John's expressive Blues harp playing answers his voice and fulfills his songs when he solos. As Muddy found a musical soul-mate in harp player Little Walter, John Nemeth has found one in celebrated contemporary Blues Guitarist Junior Watson. Junior stands out from the pack of today's finest Blues guitar players, always revealing the essence of a song and crafting the perfect stylistic touch and tone. In 2004, Junior was nominated for a W.C. Handy Award for best Blues guitar player. The Blues World appreciates Junior, but nobody admires him more than other Blues guitar players. When he plays with John, they inspire each other, and one plus one equals way more than two. John Nemeth, in addition to singing and playing so well, also found the fine players for this album, chose cover songs that showcase his depth, wrote original songs that stand proudly next to those covers, and arranged and produced this album. As with his vocal and harp performance, there's no evident explanation for how he's accomplished this, given his youth and today's musical climate. It's a gift from "Out of the Blue," from and "Old Soul," that he's passing on to us. Come and Get It. 'Definitely one of the best club shows that I've ever seen. John NĂ©meth is simply the Blues artist that I feel is most deserving of more recognition. Check the man and his band out whenever you might get the chance.' Don 'T-Bone' Erickson, Founding Editor of Blues Wax, 2004 'Boy! John NĂ©meth can really belt it out!' Charlie Musslewhite, 2004 'I remember telling friends up North in '80 that they should go see Stevie Ray Vaughan, but they weren't impressed because he wasn't famous yet. It will give me great pleasure to say, 'I told you so!' about John NĂ©meth. You'll see.' Bob Margolin, Blues Revue Magazine, Dec/Jan 2005 'Definitely one of the finest new artist performing Blues in the country today. Catch him now so you can say you saw him in the early years of his soon-to-be giant career!' Greg Johnson, Blues Notes, 2004 'The show stealer of the afternoon was a vocalist with as many octaves as humanly possible or so it seemed. Either John NĂ©meth is one of the greatest vocalists in the world or this was the best performance of his life, or both. Write down his name, you will hear about him for many years to come.' Bob Horn, President, Washington Blues Society 2004 Bio John NĂ©meth is a traditional Blues singer whose style resembles that of B.B. King, Ray Charles and Junior Parker. His decade long career has found him opening for Robert Cray, Keb Mo', and Earl Thomas. Performing major music festivals around the United States, Scandinavia, and Canada as both a featured artist of the Junior Watson Band and fronting his band the Jacks has brought him critical acclaim. The Cascade Blues Association selected Nemeth as a crowd favorite at the Portland Waterfront Blues Festival in 2002, and the Washington Blues Society called him the show stealer at the Winthrop Rhythm and Blues Festival in 2003. He is considered a topnotch harp blower. Greg Johnson of Blues Notes writes, 'John NĂ©meth possesses rich harmonica tone that easily brings to mind Sonny Boy Williamson and Little Walter.' 'Come And Get It' is Nemeth's latest release, and features the Junior Watson Band. The album has received rave reviews and is currently climbing the independent blues radio charts. Bob Margolin writes, 'John NĂ©meth is a natural-born Bluesman, and he proves it with every note he sings, shaping each one with emotion, taste and inspiration. The subtle inflections and references to masterful singers bring fresh surprises with repeated listening.'