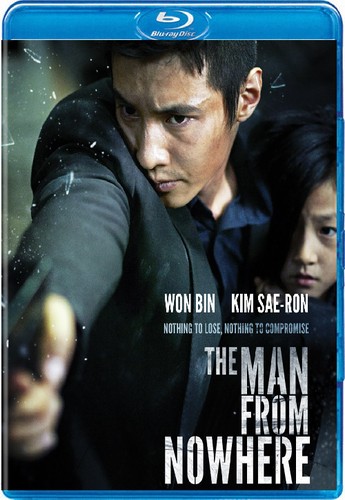 The Man From Nowhere
Format: Blu-Ray
New: IN PRINT AND ORDER-ABLE - NOT IN STORE, call or email $28.99
Wish

Tae-shik (Won Bin) is an ex-special agent whose tragic past has made him distance himself from the world. He now lives in solitude and runs a small pawnshop. The only people he now sees are the few pawnshop customers and So-mi (Kim Sae-Ron), the young girl who lives next door. So-mi has also been neglected by the world and as she and Tae-shik begin to spend more time together, the two gradually open themselves to one another and become friends. Then one day, So-mi suddenly disappears. So-mi s mother becomes involved in a major crime causing both her and So-mi to get kidnapped. Tae-shik is drawn back out into the world in a frantic search for So-mi s whereabouts. In order to save So-mi, his one and only friend in this world, Tae-shik makes a certain arrangement with the crime mob. While So-mi is still nowhere to be found, the police begin to chase after Tae-shik. With the police and the underground mob close on his tail, Tae-shik continues his frantic search for So-mi and his hidden past slowly becomes revealed...