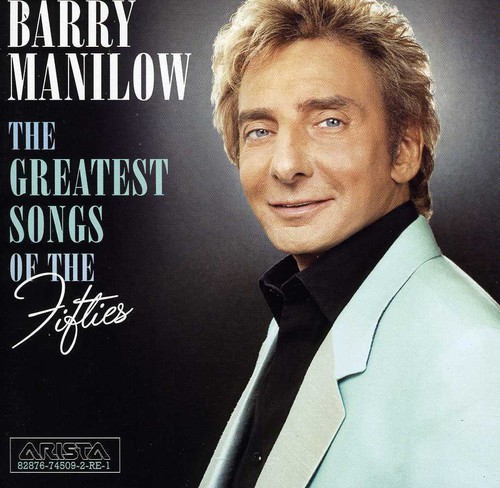 Greatest Songs Of The 50s
Artist: Various Artists
Format: CD
New: IN STOCK AT OUR STORE Used: Used Items are fully guaranteed to be free from defects, and good as new.
Wish

No one can reinvent the great classics of the 1950's better than Barry Manilow. He breathes new life and vitality into these truly wonderful songs and they sound fresh and timeless. Highlights include a guest appearance from Phyllis McGuire of the McGuire Sisters on the medley of 1954 hits and veritable jukebox of favorites such as Bobby Darin's 'Beyond the Sea', Frankie Avalon's 'Venus' and Johnny Mathis' 'It's Not for Me to Say'. Arista. 2006.

''The Greatest Songs of the Fifties'' is an album by veteran American singer Barry Manilow, released in the United States on January 31, 2006. A significant album for Barry Manilow, it finds the Brooklyn-born crooner taking on songs that were popular in his youth. The project also marked Manilow's return to his former label, Arista, with the company's founder, Clive Davis, setting the singer up with 1950s pop classics much in the way that the savvy businessman steered Rod Stewart in the direction of jazzy standards in his successful ''The Great American Songbook'' project. The album was an amazing hit in the United States. It entered the Billboard 200 at No. 1, giving him the second chart-topping album of his career. His only other No. 1 album was ''Barry Manilow Live'', in 1977. This is also the highest-debuting album of his career, selling over 150,000 copies in its opening week and besting the No. 3 opening of ''Ultimate Manilow'' in 2002. - Wikipedia

At the urging of once-and-future maestro Clive Davis, the great cultural historian/commercial jingle writer/bathhouse pianist tackles such "rarely sung" (sez he) hits from the '50s as "All I Have to Do Is Dream," "Young at Heart," "Are You Lonesome Tonight," and the all-but-forgotten "Unchained Melody." Watch out, Rod!
This website uses cookies to personalize content and analyse traffic in order to offer you a better experience.
I accept Learn More
back to top