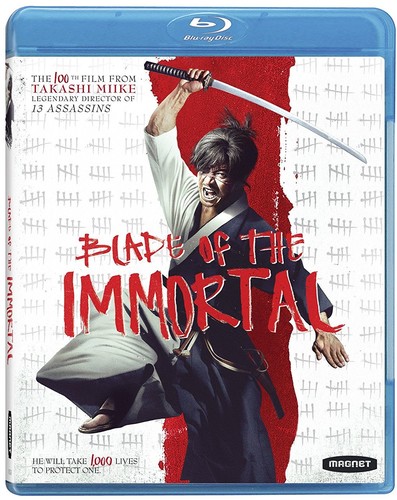 Dreaded warrior Manji (Takuya Kimura) failed to protect his younger sister Machi (Hana Sugisaka) from a pack of rivals... and as he lay dying after taking his vengeance, he was cursed with regenerative powers and immortality. Half a century later, all he sought was redemption and eternal rest, and believed he might find both in aiding an orphaned girl (also Sugisaka)-the image of Machi-in gaining revenge on her family's killers. Takashi Miike's electric adaptation of the popular manga co-stars Sôta Fukushi, Hayato Ichihara. 140 min. Widescreen; Soundtrack: Japanese; Subtitles: English. In Japanese with English subtitles.