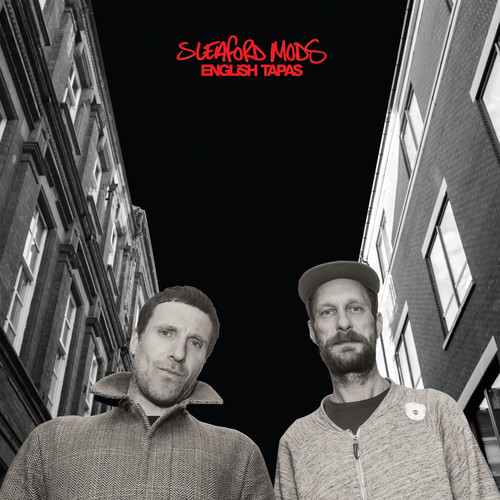 “Undoubtedly, absolutely, definitely the world’s greatest rock ‘n’ roll band.” – Iggy Pop Call them minimalist agit-rock, beat-based political punk, or…don’t, but what you can’t call Sleaford Mods is half-arsed. They’re aggressive, abrasive, and unabashed in their lyrical support for England’s working class and in railing against the oligarchs who deny people their basic human and civil rights. Vocalist Jason Wiliamson shouts against austerity-era Britain’s malaise and stagnation with plenty of profanity, but even more cleverness and wit; and while his lyrics specify conditions in his home country, his anger and call-to-arms can unite all of us who witness and work under a system that privileges the wealth of the few over the bare comfort, and even the survival, of the just-as-worthy many. With Andrew Fearn’s deceptively simple beats and melodies underpinning Williamson’s virtuosic vocal performances, this would be a fascinating record, message or no; but the drive, meaning, and compassion behind these catchy, and even dancefloor-ready tunes make this album as vital politically as it is artistically. Sleaford Mods are at their sneering, yowling best with English Tapas.
back to top