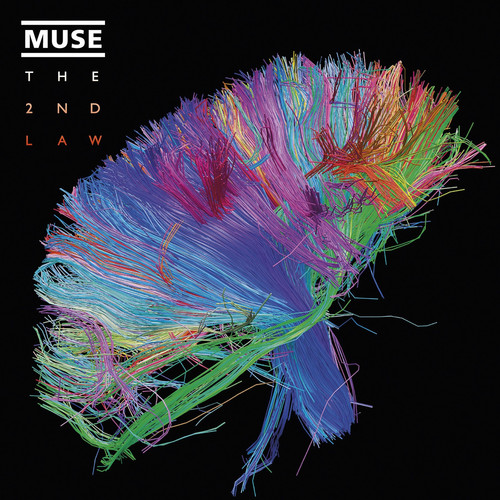 Muse return with their sixth studio album, The 2nd Law: an album titled after and thematically influenced by the Second Law of Thermodynamics, which concerns the inevitable wasting of energy within a closed system.

Muse didn't set out to make the most gloriously ambitious album of their career. How could they have? The band who dreamt up "Supermassive Black Hole," Knights Of Cydonia and the three-part "Exogenesis" symphony were already well-versed in going One Louder. Any wilder, any further out there, and Muse would risk incineration by a dwarf star of their own making. But you don't become one of the biggest bands on this planet by sitting on your hands.

So when Muse approached the making of their sixth studio album, they wouldn't stint on the choirs, strings and horn sections. And be reassured: guitar-shredding, piano-thumping, orchestra-arranging, book-chewing, big-thinking Matt Bellamy, as the band's chief songwriter, didn't lower his sights from The Big Picture nor ignore The Precious Details. And nor were the trio afraid of giving space to a brilliant new element to their sound - songs written and sung by bass player Chris Wolstenholme.

But what the Devon-born band of schoolfriends did do different was this: they made things easy for themselves. For the first time since the dawn of their career in smalltown England 18 years ago, all three members were living in the same place during the making of an album.

And this time, Muse had the experience born of self-producing The Resistance to apply their studio knowledge to creating the album they really wanted to make.

It was about saving aggro, and conserving energy. And, appropriately, it was about The 2nd Law: an album titled after and thematically influenced by the Second Law of Thermodynamics, which concerns the inevitable wasting of energy within a closed system.