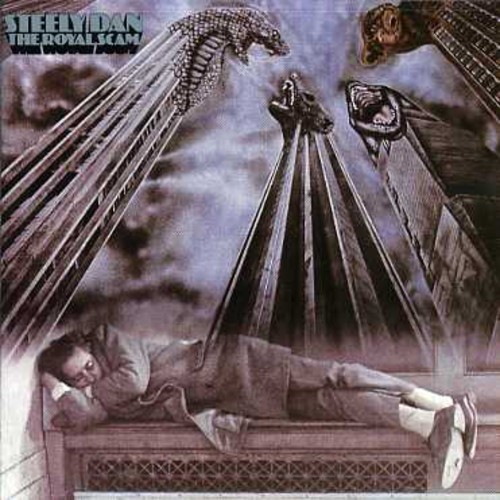 The revamping of the classic Steeley Dan catalog of orginal albums on CD continues with a truly revered album. Complete with upgraded, state of the art sounds, complete original art, notes and lyrics, plus newly penned liner notes by none other than Donald Fagen and Walter Becker, the Dan themselves.

''The Royal Scam'' is the fifth album by Steely Dan, originally released in 1976. The album went gold and peaked at #15 on the charts. ''The Royal Scam'' features more prominent guitar work than other Steely Dan albums. Guitarists on the recording include Walter Becker, Denny Dias, Larry Carlton, Elliott Randall and Dean Parks.

With irony-laden verses about drug dealers, safe sex, extramarital affairs and hardships faced by immigrants, ''The Royal Scam'' is arguably Steely Dan at its most cynical. The mood of the album stands in contrast with the band's mellower and hugely successful follow-up, ''Aja''.

The album cover, which shows a possibly homeless man sleeping underneath (or perhaps dreaming of) images of mutating skyscrapers, is a satirical take on the American Dream. The drawing and painting of the skyscrapers topped with various animal heads (snake, etc.), was considered dark, eerie, gothic, and very much ahead of its time. The cover was designed by Larry Zox, and was originally created for Van Morrison's unreleased 1975 album, ''Mechanical Bliss''. In the liner notes for the 1999 remaster of the album, Fagen and Becker claim it to be "the most hideous album cover of the seventies, bar none (excepting perhaps ''Can't Buy A Thrill'')."

In common with other Steely Dan albums, ''The Royal Scam'' is littered with cryptic allusions to people and events both real and fictional. In a BBC interview in 2000, Becker revealed that Kid Charlemagne is loosely based on Augustus Owsley Stanley, the notorious drug "chef" who created hallucinogenic compounds for, among others, Jim Morrison of The Doors, the Grateful Dead, and The Beatles. - Wikipedia