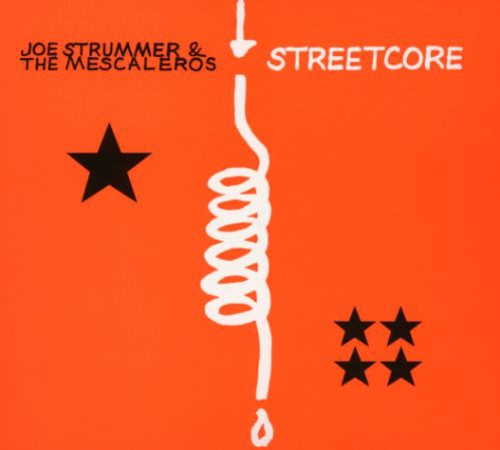 Streetcore
Artist: Joe Strummer & The Mescaleros
Format: CD
New: IN STOCK AT OUR STORE Used: Used Items are fully guaranteed to be free from defects, and good as new.
Wish

Unlike Warren Zevon and George Harrison, Joe Strummer had no inkling that his mortal coil was unwinding in the fall of 2002, as he started to make what would prove to be his final album. Consequently, Streetcore-the former Clash frontman's third set with his band the Mescaleros-is not particularly focused on demise, though it does contain some eerily prescient wide-view observations about his life. Mostly, however, this is just another very good record from Strummer, who had clearly grown more comfortable with the Mescaleros and was coming up with some of the most varied and richly drawn material of his career when he died of a heart attack last December 22 at the age of 50. The energetic "Coma Girl," for instance, is a nicely detailed remembrance of a rock festival encounter over a light reggae groove. "Get Down Moses," meanwhile, plows a phatter course as Strummer exhorts like a Jamaican high priest. "Arms Aloft" and "Burnin' Streets" are triumphant anthems, while the lively, loop-driven "All in a Day" recalls former Clash partner Mick Jones' Big Audio Dynamite and the mostly instrumental "Midnight Jam" flows through a series of moody, midtempo flavors. There are plenty of heart-tugging moments on Streetcore, too, like the acoustic, folky "Long Shadow," on which Strummer declares that "somewhere in my soul/ there is always rock 'n' roll," or his straight-to-the-bone acoustic rendering of Bob Marley's "Redemption Song." But the definitive final statement turns out to be his plaintive, harmonica- and fiddle-fueled cover of Bobby Charles' "Before I Get Too Old," which Strummer retitles "Silver and Gold;" "I'm gonna go out dancing every night/ I'm gonna see all the city lights," he sings, the kicker being that "I got to hurry up before I grow too old." Streetcore, however, makes it sound like Strummer was in the kind of stride many younger artists would envy.
This website uses cookies to personalize content and analyse traffic in order to offer you a better experience.
I accept Learn More
back to top