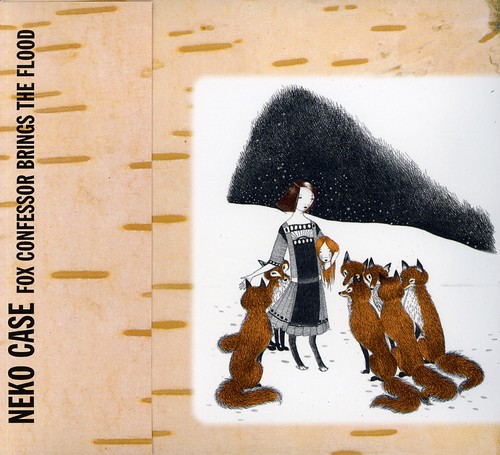 Two years in the making from conception to completion, Fox Confessor Brings the Flood is a culmination of sorts, the sound of an artist fully coming into her own and producing a career-defining statement. Case's work has always hinted at a uniquely skewed gyroscope at the center of the music, her songs at once playful and heartfelt, artsy yet unpretentious.

''Fox Confessor Brings the Flood'' is a 2006 album by Neko Case. It was her first solo studio album in four years.

The album was recorded at Wave Lab Studios in Tucson, Arizona, except the beginning of "John Saw That Number", which was recorded in a stairwell at Toronto's Horseshoe Tavern; and "At Last", which was tracked at Toronto's Iguana studio. Case is backed by several collaborators, including bandmates Jon Rauhouse and Tom V. Ray, as well as frequent collaborators The Sadies, Giant Sand's leader Howe Gelb, vocalist Kelly Hogan, Calexico's Joey Burns and John Convertino, and Canadian cohorts Brian Connelly and Paul Rigby. Rachel Flotard of Seattle punk-pop combo Visqueen also guests, as does legendary multi-instrumentalist Garth Hudson of The Band. The album was engineered by Craig Schumacher and Chris Schultz, and produced and mixed by Neko Case and Darryl Neudorf. It has sold 194,000 copies in the United States up to December 2008.

The album has a music video, for the song "Maybe Sparrow". "John Saw That Number" was featured in the ending of an episode of ''Big Love''.

The album was ranked at #18 on Tiny Mix Tapes' Favorite Albums of 2006 list. - Wikipedia

It's Neko Case's world; she just doesn't want it. We, the indie-satiable public, are happy to live there, gobbling up her enrapturing, meditative alt-country solo albums-not to mention everything that the infectious pop collaborative the New Pornographers put out-expecting a leap to universal dominance that never comes. Despite possessing a refined beauty and talent that makes both lads and ladies swoon, Case remains a media recluse, eschewing videos and major label jackpots, steadily accruing even more cred and popularity. The wry singer-songwriter is content to exist in her own insular world of Canadian collaborators (the Pornographers and the Sadies) and there's nothing cute or showy about her solo endeavors. Fox Confessor is a blend of fables, murder ballads (the chilling "Dirty Knife") and bittersweet reminiscences that should vault her onto everybody's year-end Top 10 list. We'll take this miss independent over Kelly Clarkson any day.
This website uses cookies to personalize content and analyse traffic in order to offer you a better experience.
I accept Learn More
back to top