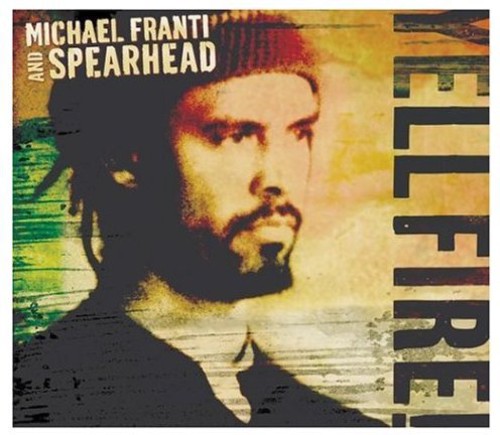 Yell Fire
Artist: Michael Franti & Spearhead
Format: CD
New: IN STOCK AT OUR STORE $16.98 Used: Used Items are fully guaranteed to be free from defects, and good as new.
Wish

In 2004, Franti and his team traveled to the core of the red-zoned, war torn neighborhoods of Baghdad, the West Bank, and the Gaza Strip with his guitar, video cameras, and the intent to experience first hand the human cost of war. Out of this journey, he created a compelling documentary ("I Know I'm Not Alone") and a searing, reflective album of original songs. YELL FIRE is his most compelling, engaged collection of songs, fired by a fury at the injustice of war, and a rediscovery of love and community that supports those doing the fighting. It embraces reggae, blues, folk, hip-hop, and the anthem politics of rock artists like U2 and Springsteen. With massive grooves and soaring choruses, Franti and Spearhead have produced an album to inspire and ignite.

''Yell Fire!'' is a 2006 album by the reggae-influenced band Michael Franti and Spearhead. It was inspired by Michael Franti's trip to the Middle East, visiting Iraq, Israel, and the Palestinian territories. It is a politically charged album, with each track focusing on a controversial issue. The album was recorded in Kingston, Jamaica and San Francisco and released on July 25, 2006 by ANTI- and Liberation Records.

With Sly & Robbie guesting, the ever-worthy lefty polemicist steps up his rhythmic game here. And maybe boosts his pop profile too-Pink's also onboard.
This website uses cookies to personalize content and analyse traffic in order to offer you a better experience.
I accept Learn More
back to top