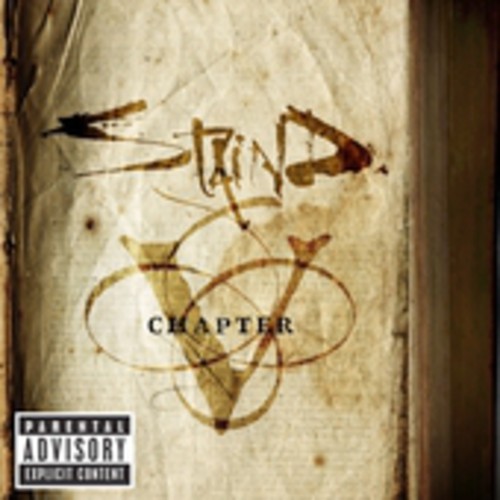 Chapter Vmarks the return of one of the biggest-selling rock groups in America today. Recorded at Allaire Studios in Shokan, NY and at the band's Springfield, MA rehearsal space, the CD was produced and mixed by David Bottrill (Peter Gabriel, Mudvayne, Godsmack). Staind is back in a huge way!

''Chapter V'' is the fifth studio album from Staind. It was released on August 9, 2005, debuted at number 1, and has spawned four moderately successful singles on rock radio. Its first single "Right Here" was the most successful at both rock and pop stations, and was used in a video package by World Wrestling Entertainment commemorating wrestler Edge after he won his first WWE Championship. "Falling", "Everything Changes" and "King of All Excuses" have also been released with accompanying videos.

Lead singer Aaron Lewis has stated that he thinks 'Chapter V is the best record the band have released to date', and the album continues the evolution from the messages on ''14 Shades of Grey'' to messages of hope and uncertainty. It also showcases a heavier side to the band on selected tracks (reminiscent of some content on ''Dysfunction''), and emphasizes a balance between both style of the band's sound. The album includes a track called "Paper Jesus" targeted at record company executives who idolize money instead of music and "Reply", an open letter replying to fan mail that Aaron Lewis and the rest of the band have received over the years (the original version can be found on the Special Edition).

Since its release, it has sold 1,200,000 copies in the United States and 1,500,000 worldwide. However, it marked Staind's lowest debut so far in the UK, at number 112. All the same, it was regarded as one of the most anticipated albums of the year in the U.S. before its release. A special edition, with five bonus tracks, an extra booklet and a DVD was released several months later. Even after a full year, it remains fairly consistent on the Billboard 200. Aaron Lewis has said in relation to this in the booklet of the Special Edition of the album: "Having three straight number one albums was a nice big fuck you to a lot of people who have slagged us. Nobody can ever take away that fact."

Staind have promoted the album by allowing selected fans to preview it on their tour bus, and touring after its release for a whole year, including mini tours to Australia and solo tours across Europe, as well as the famous Fall Brawl Tour with Flyleaf, Taproot and P.O.D.. The band have also toured with 3 Doors Down, Hurt, Three Days Grace, Breaking Benjamin, and Seether (later cancelled) across the United States to promote the album. - Wikipedia

Staind has a bit of an identity crisis. The Massachusetts quartet is, at its core, a heavy rock band, rooted in a muscular and lumbering post-grunge. But their biggest songs, "Outside" and "It's Been Awhile," are quiet and mournful expressions of angst, the n"u-metal equivalents of power ballads. Rather than giving itself over to the inevitable and steering its repertoire in that direction, Staind shows some mettle with its metal on the group's fifth album.

"Falling" cruises along guitarist Mike Mushok's meaty groove, while the leaden, rolling rhythm of "Please" has a Black Sabbath flavor. Aaron Lewis' doubled lead vocals give "Paper Jesus" an Alice in Chains feel, and "King of All Excuses" has plenty of bite to go with its lyrical bile. But the smoothness of the up-tempo tracks that bookend Chapter V, "Run Away" and "Reply," indicate that Staind is not unaware of what works on the airwaves-nor averse to delivering it.

There's plenty of balladic fare, though, including first single "Right Here" (a more nuanced piece than its predecessors), the ebb-and-flow "Everything Changes" and the evocative "Schizophrenic Conversations," in which Lewis invites us to "crawl inside my head" and declares that "I still exist in spite of you," as though singing to those mellow tunes that undermine Staind's rock reputation.