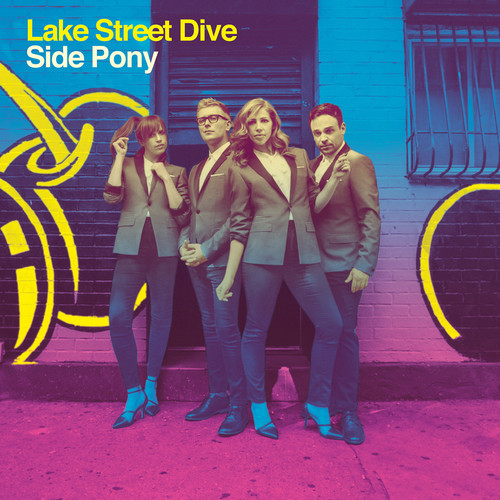 Side Pony
Artist: Lake Street Dive
Format: CD
New: IN PRINT AND ORDER-ABLE - NOT IN STORE, call or email $15.99
Wish

Side Pony takes its name from a song on the record that refers to a whimsical hairstyle, but it also serves as a metaphor for Lake Street Dive's philosophy and personality as a band. As Kearney puts it, "When we were settling on the album title, that one just stuck out to us as embodying the band's spirit. We've always been this somewhat uncategorizable, weird, outlying, genre-less band. That's the statement we wanted to make with this record: be yourself."

Olson echoes her sentiment: "It has also come to mean anything you're doing for the sheer joy of it. We have always 'rocked our side pony.' Now we have a convenient phrase for it."

Cobb's working method was to keep the recording fast and loose, as live-in-the-studio as possible, and to embrace the unorthodox. This provided Lake Street Dive with a welcome challenge: an opportunity to experiment with sound and arrangements and to collaborate on songwriting in a way the band had never attempted before.

Calabrese says of the recording process, "Dave's process was mercurial, changing direction quickly, going from 'we don't have anything' to 'we've got it!'" He continues, "We weren't always so sure. But then we'd listen to a comp and we'd agree that he'd heard something we hadn't."

Price adds, "It was great to see, through this particular recording process, how beautifully our individual strengths complement each other."