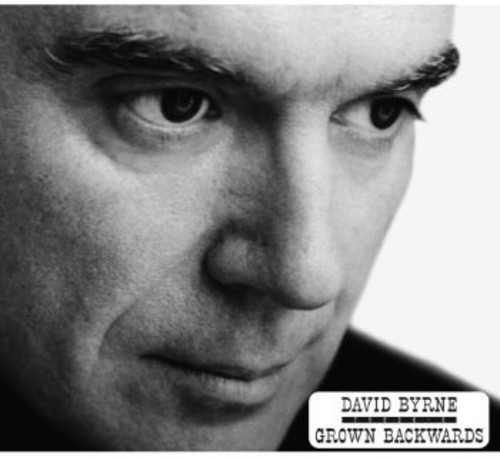 Grown Backwards
Artist: David Byrne
Format: CD
New: IN STOCK AT OUR STORE Used: Used Items are fully guaranteed to be free from defects, and good as new.
Wish

On his Nonesuch debut, "GROWN BACKWARDS," David Byrne offers a new set of songs whose wry observations of life form one of the artist's most emotionally rich and personally expressive statements yet. This album includes the uptempo "Glass, Concrete, Stone," the anthemic "Empire," which features Carla Bley's jazz band.

There are surely those who will hope the title of David Byrne's latest album means the multi-faceted music man is veering back towards the skewed rock of Talking Heads. But those who really know Byrne realize that's about as likely as him joining Pantera. Grown Backwards refers to the way Byrne approached writing the 11 original songs here; rather than building up from grooves and rhythms, he first came up with melodies-usually hummed into micro-cassette recorder-and worked down from there. This intriguing creative exercise, however, makes for a somewhat docile outing, and these spare song constructs have sturdy tunes but arrangements-built around hand percussion, strings and an occasional guitar or horn-that are decidedly meatless. It's an album for the ears and for the head, which is all well and good yet not nearly as much fun as the sophisticated booty-moving music Byrne has done so well since the late '80s. Still, Grown Backwards is an engaging listening experience, from playful pieces such as "She Only Sleeps,"  "The Other Side of This Life" and his cover of Lambchop's "The Man Who Loved Beer" to more politically pointed fare like "Empire." Byrne engages in light samba flavors on "Why" and "Tiny Apocalypse," while the hushed "Astronaut" and the accordion-spiced "Civilization" evoke the ambience of outdoor French cafes on hot, lazy afternoons. Byrne also delivers a pair of arias this time around, "Una di Felice" from Verdi's La Traviata and a duet with Rufus Wainwright on "Au Fond Du Temple Saint" from Bizet's The Pearl Fishers. It all speaks well for the rock renaissance man, but here's hoping he hasn't completely lost touch with Rei Momo.
This website uses cookies to personalize content and analyse traffic in order to offer you a better experience.
I accept Learn More
back to top