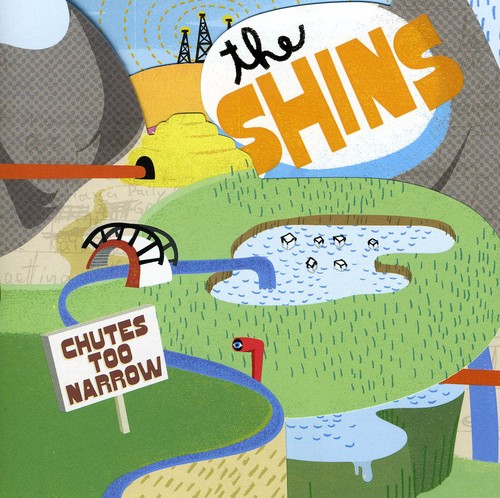 Chutes Too Narrow
Artist: The Shins
Format: CD
New: NOT IN STORE, BUT IN PRINT AND ORDER-ABLE - , call or email $14.98 Used: Used Items are fully guaranteed to be free from defects, and good as new.
Wish

This is the follow-up to their critically acclaimed debut full-length, "Oh, Inverted World". With ten songs, clocking in at just over 30 minutes, the new record is a brief yet entirely scintillating glimpse at chiming, reflective, and perfectly skewed pop innovation. It's exactly what Shins fans are looking for and more.

''Chutes Too Narrow'' is The Shins' 2003 follow-up to their debut album, ''Oh, Inverted World''. The album title comes from a lyric in the song "Young Pilgrams." The album was well-received by critics, garnering an overall score of 88/100 on Metacritic. According to Nielsen SoundScan, they have sold over 393,000 copies to date.

''Chutes Too Narrow'' features cleaner production standards than the "lo-fi" ''Oh, Inverted World''. This is largely due to the album's being mixed by producer Phil Ek, who has also worked with Built to Spill and Modest Mouse. ''Chutes Too Narrow'' also departs from the band's keyboard-driven debut and shifts towards more emphasis on guitars.

The album also included violin parts on "Saint Simon", played by Annemarie Ruljancich, and was nominated for a Grammy Award for Best Recording Package. The cover art was designed by Jesse LeDoux. The songs "Gone for Good" and "Those To Come" were used in the 2004 film ''In Good Company''. "Those To Come" was also used in the 2005 film ''Winter Passing''. - Wikipedia

Two years ago the Shins put out a catchy little record called Oh, Inverted World that knocked a bunch of sedentary indie fans upside the head. Like most bands recreating late sixties psych pop, their list of influences was short but emphatic-all you need is Love, plus an armful of a few early Pink Floyd, Zombies and Beach Boys records. But while most of the competition never pulled off the trick, their experiments seeming like an acid trip explained in the sober morning light, the Shins seemed to breathe the same air as their role models. On songs like "Know Your Onion!" chords tumbled into each other from unexpected directions in that classic Syd Barrett manner and the band emerged from the tangle with something you could keep humming afterward.

This time out, the Shins are simpler and sweeter. The basic tracks on Chutes Too Narrow are primarily acoustic, with organ or electric guitar or even strings whispering over top, and the rhythms shuffle forward in a single, committed direction. At times, their sound reminds me of the La's, a better-than-average Liverpool act who garnered praise in the early '90s (and the meaningless tag "Beatle-esque") before they reformed as Cast and disappeared into the nether regions of the British press. But like the La's, there's a slightness to this music even at its most declarative: it doesn't want to command your attention, it insinuates.

Fortunately frontman James Mercer isn't afraid to spend a lot of time in his shrill upper register, sometimes even straying into Rufus Wainwright territory, though he never abuses the privilege as egregiously as Neutral Milk Hotel's Jeff Mangum, with whom he shares a certain style of vocal elasticity. Mercer's occasional stridence is actually welcome-if the vocals were any prettier, if they combined for cushions of harmony, the songs might fade into the ether entirely. Mercer's lyrics ("I saw your convictions/ Melt like ice cubes in an ocean") don't offer much insight into his soul, or much else, but based on temperament alone, he seems like an ideal ex-boyfriend. Even on apparent kiss-offs like "Mine's Not a High Horse" he's never bitter, or at least his voice isn't.

You might say that the Shins have matured into a more original sound, but in fact their more relaxed folkedelic feel has a unseemly familiarity to it-even the occasional country affectation is an indie clichnow. The most exciting thing here, "Fighting in a Sack" explodes like the theme to a hypothetical "Friends" spin-off, but none of the songs here earns "Know Your Onion!"s exclamation point.