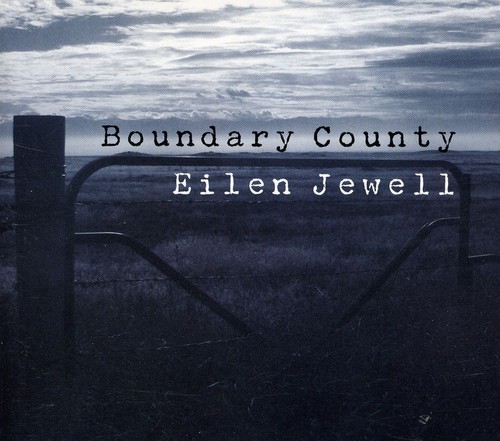 Boundary County
Artist: Eilen Jewell
Format: CD
New: IN STOCK AT OUR STORE $15.99 Used: Used Items are fully guaranteed to be free from defects, and good as new.
Wish

Eilen Jewell's love of music began on a 1500-mile family road trip from Anchorage, Alaska to her hometown of Boise, Idaho. Bundling his wife, daughter, week-old son, and husky dog into the family Volvo, Eilen's father (a tree farmer from a long line of Idahoans) put on a tape of Beethoven's piano sonatas and seven year-old Eilen was so fascinated, she begged her parents to let her take piano lessons when they got back to Boise. And the 26 year-old has been plunging headlong into anything and everything musical ever since. At 14, she dug her parents' old records out of storage, a discovery which led her to pick up her first guitar. Her favorites from those dusty old boxes were Bob Dylan's Bringing It All Back Home and a Sun Records Howling Wolf album. These discoveries eventually led the quiet teenager to the music of Bessie Smith and Billie Holiday who, along with Dylan and Howling Wolf, remain her biggest influences today. Five years later, at only 19, Eilen began performing at farmer's markets and local bars in Santa Fe, New Mexico (as a college student at St. John's), before moving to Los Angeles, where she became a fixture in the Venice Beach street-performance circuit. After her time there had run it's course, Eilen journeyed across the country to New England in January, 2003. She settled briefly in the Berkshire Mountains of Massachusetts and got her start at the legendary Club Helsinki, first performing at the club's open mic, but quickly graduating to opening sets for esteemed artists such as Geoff Muldaur. Before leaving the Berkshires, Eilen recorded her first demo, One of Those Days, a solo effort containing sparse arrangements of originals and covers such as the old blues standard "Nobody's Business," (made popular by artists like Mississippi John Hurt, Bessie Smith, and Big Bill Broonzy). It showcased not only Eilen's quietly adept guitar picking and lush, relaxed voice, but a beyond-her-years understanding of (and ability to write in) old country blues form and style-a style that fits her as appropriately and comfortably as a worn old glove. Eilen began to attend old-time music jams near Boston, where she met drummer Jason Beek and harmonica player PJ Eastman. Seeing that Boston had a lot to offer musically, Eilen moved there in late Fall of 2003 and was quickly welcomed into the famous and still vibrant community of folk and roots musicians. Performing with bands as well as solo, she cut her teeth first at venues like Club Passim, Plough and Stars and Johnny D's. Eilen learned some of her first lessons about the music business from veteran bass player and band-mate Paul Strother (Rounder Records' Chicken Chokers). PJ Eastman provided powerful blues harmonica for Eilen while Strother and Beek laid down her rhythm section. During this time she released a live demo to sell at shows and nearly recorded a full album. However, the master for that album, as well as the entire studio where it was recorded, perished in a fire. The loss of this album opened Eilen's eyes to the need for a new musical direction. She then put her energy towards the making of the live demo Nowhere in No Time-a very sparse-sounding, live demo with Jason Beek on drums and Daniel Kellar on violin. This album was released on a very limited basis in March, 2005. Also at this time, Eilen began what has become a very successful, early Saturday evening residency at Tir na nOg pub in Somerville, Massachusetts through today. Eilen has enjoyed an incredible amount of support from venue owners Robert Elliott and Fergal O'Toole. Tir na nOg is the perfect marriage of a listening room environment and friendly Irish pub. Playing every week at the nOg, in addition to monthly appearances at local and regional venues, Eilen has begun to settle on a consistent line-up of band members. They include Daniel Kellar, Jason Beek and upright bass player Johnny Sciasica. In December, 2005, confident about the material and the players she wanted to record with, Eilen entered Chris Rival's renovated, 19th century barn/studio to record Boundary County. Two days of recording, days of mixing and mastering and months of artistic decisions later, Boundary County is ready for you to hear. This album is the best representation of Eilen Jewell's music to date. Enjoy...
This website uses cookies to personalize content and analyse traffic in order to offer you a better experience.
I accept Learn More
back to top