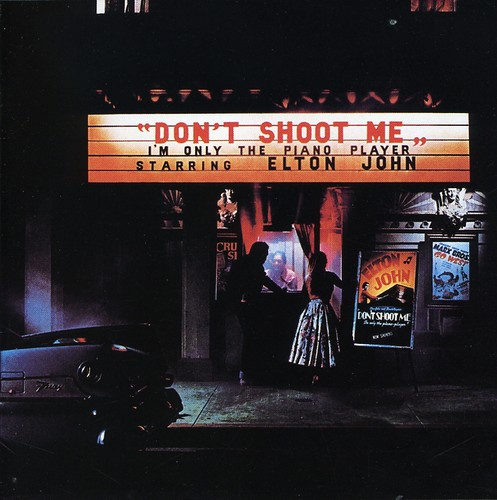 ''Don't Shoot Me I'm Only the Piano Player'' is the sixth studio album by British singer/songwriter Elton John.

This was Elton's second straight #1 album in America and yielded his first #1 single in both the U.S. and Canada - "Crocodile Rock". "Daniel" was also a major hit from the album, giving him his second Canadian #1 single on the ''RPM'' Top Singles Chart and just missing the top slot south of the border, stalling at #2 on the U.S. ''Billboard Hot 100'' and reaching #4 in the U.K., one place higher than achieved by Crocodile Rock. According to writer Philip Norman, Elton's friend Groucho Marx jokingly pointed his index fingers at Elton John during a get together in California as if holding a pair of six-shooters. Elton John put up his hands and said, "Don't shoot me, I'm only the piano player," so naming the album. Along with "Crocodile Rock" ''Don't Shoot Me I'm Only the Piano Player'' contained more songs with a pop flavour, including "Elderberry Wine" (the B-side of the "Crocodile Rock" single), "I'm Gonna Be a Teenage Idol", and "Teacher I Need You". Many long-time fans however, lamented this change, wishing he had stayed true to his original roots of simple piano ballads which were the staple on most of his earlier albums. The album contained two top-ten U.S. pop singles, "Daniel" and "Crocodile Rock", with the latter reaching number one. It sold about 14 million copies worldwide. This is the one of only two albums to feature the band of Elton John, Davey Johnstone, Dee Murray and Nigel Olsson without percussionist Ray Cooper. The other album is ''Breaking Hearts''. - Wikipedia