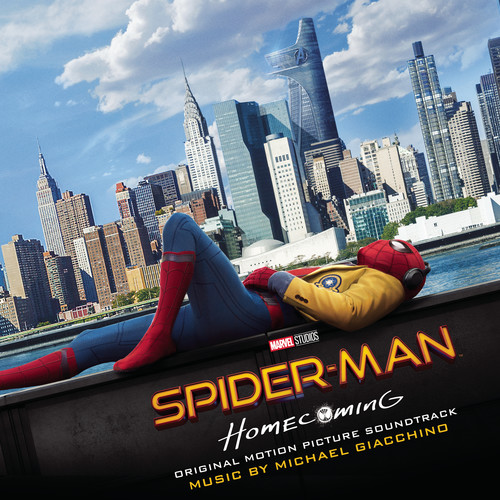 About the Movie A young Peter Parker/Spider-Man, who made his sensational debut in Captain America: Civil War, begins to navigate his newfound identity as the web-slinging superhero in Spider-Man: Homecoming. Thrilled by his experience with the Avengers, Peter returns home, where he lives with his Aunt May, under the watchful eye of his new mentor Tony Stark. Peter tries to fall back into his normal daily routine - distracted by thoughts of proving himself to be more than just your friendly neighborhood Spider-Man - but when the Vulture emerges as a new villain, everything that Peter holds most important will be threatened. Spider-Man: Homecoming stars newcomer Tom Holland as Peter Parker/Spider-Man along with Academy Award® nominees Robert Downey, Jr. as Iron Man, Michael Keaton as the Vulture and Oscar® winner Marisa Tomei as Aunt May. The movie opens in theaters nationwide on July 7. About the Composer Academy Award®-winning composer Michael Giacchino grew up fascinated with both movies and music and has gone on to a successful career writing scores for acclaimed films, television series and video games. A graduate of the Juilliard School, Giacchino started his career composing scores for a number of successful video games including the Medal of Honor and Call of Duty franchises. In 2001 producer J.J. Abrams invited Giacchino to write the music for his television series, Alias and later the music for the hit cult series, Lost, for which Giacchino won the Grammy Award® for Outstanding Dramatic Score in 2005. He went on to compose the scores for a series of Pixar films including The Incredibles, Ratatouille, Cars 2 and Up for which he won an Academy Award® as well as a Grammy Award® for the film s soundtrack album. Since then, Giacchino has maintained a busy schedule scoring major motion pictures such as Mission Impossible III, Cloverfield, Star Trek (2009), Inside Out, Tomorrowland, Doctor Strange, Star Trek Beyond and the latest block-buster for the Star Wars franchise, Rogue One: A Star Wars Story.
This website uses cookies to personalize content and analyse traffic in order to offer you a better experience.
I accept Learn More
back to top