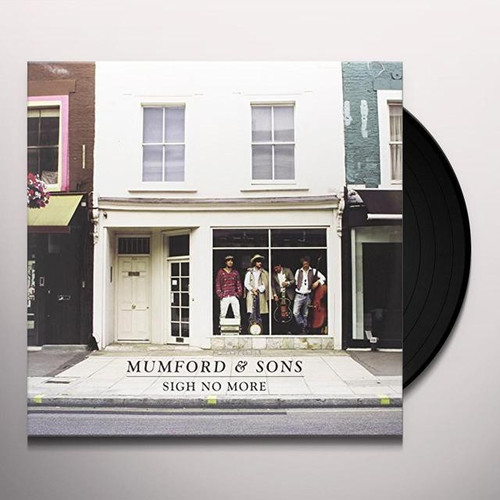 Sigh No More
Artist: Mumford & Sons
Format: Vinyl
New: IN PRINT AND ORDER-ABLE - NOT IN STORE, call or email 19.98
Wish

Vinyl LP pressing. 2010 release from the West London Indie Rock quartet. Mumford & Sons, have created a gutsy, old-time sound that marries the magic of Crosby, Stills & Nash with the might of Kings of Leon and the harmonies of Fleet Foxes. Sigh No More was recorded at East coast Studios and produced by Markus Dravs who has worked with such superstar acts as Arcade Fire, Bjork and Peter Gabriel. Formed in 2007, the band's goal since day one has been to make music that matters.

''Sigh No More'' is the Mercury Prize nominated debut studio album by London-based folk-rock quartet Mumford & Sons, released on October 5, 2009 in the UK, and on February 16, 2010 in the United States and Canada. The album entered the UK Albums Chart at #11 on October 11, and has so far peaked at #4 on September 5th 2010, a whole 48 weeks since its initial release. The album also reached #1 in Australia, after spending 17 weeks previously in the charts, and has been certified double platinum there. On the 5th March 2010 the album certified Platinum in the UK.

In mid-2010, it was rated the year-to-date's 8th best record on NPR's All Songs Considered. - Wikipedia